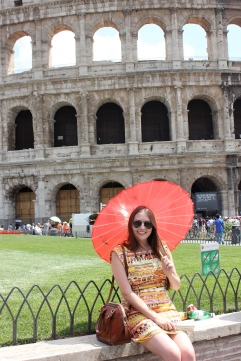 On Friday Jen and I had our first tour of Roma which was the Colosseum. The tour started at 2:15 so we decided to sleep in and grab a delicious brunch before we went. I decided to try the french toast and bacon–sweet and savory. This place did not disappoint. The french toast was cooked to perfection with a light drizzle of maple syrup. YUMMMMMM 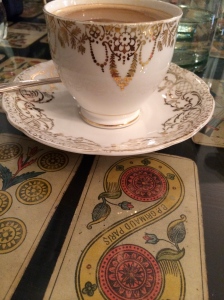 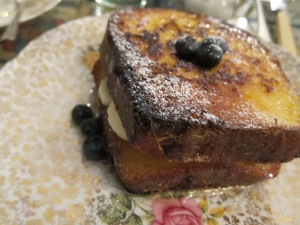 Did I mention this restaurant was adorable? Each table was covered in old playing cards. Jen mentioned that they would be the perfect souvenir, I can’t help but agree. Family and friends, be expecting some in the mail.

After our brunch we headed over to the Colosseum to meet the group. Now, we were fortunate to have the weather that we did but that still doesn’t mean it wasn’t hot. So I saw these umbrellas and thought that they would be really cute for a souvenir. Well, at about 88 degrees with the sun beating down on you and you’re holding shade in your hand. The idea of your souvenir remaining in it’s original package goes out the window and it’s all about survival. So for the remainder of the tour I was as cool as a cucumber.

Our tour guide was named Nina and she was SO great. She received her doctorate in Archaeology in Roma so she was all into the ruins and Colosseum. Before I begin, did you know that the Colosseum is just a nickname for the building? Our group got down to the base of the Colosseum where the gladiators would enter as well as the slaves and animals. There is actually still a spring that runs fresh water into the Colosseum. It was crazy to think that so much had happened in the spot that I was standing in.

One of my favorite pictures that I took was from the bottom. You can look up and see a cross where the senators and emperor would be seated. Can you imagine fighting for your life and looking up to see a bunch of people eagerly watching? I can’t.

Before I go any further, I should introduce the spawn of satan(cough cough) I mean kids on the tour. Their names were Kellen and some other name that I couldn’t understand. They were climbing on top of the ruins, kicking rocks and running around. Ya know, at first I felt bad for the parents but then I started to lose patience when their parents weren’t even attempting to get them under control. Plus, I was just trying to survive the heat and I didn’t need some munchkin kicking dirt in my shoes. Blisters were enough at that point.

After we finished at the bottom of the Colosseum, we hiked to the top and saw one of the most magnificent views of the city. The breeze was so nice and you were able to also see the full layout of the Colosseum. As you can see, some parts were under restoration while we were there. The women and slaves sat at the top, the next level was lawyers and other men and the bottom row was for senators and the emperor.

After we left the Colosseum we walked over to the Palatine. Nina did a great job of illustrating how things used to be for us. She also showed us some techniques of taking pictures of older marble. My favorite part of this tour was in the Roman Forum there is the first temple built for a woman, The Temple of Antoninus and Faustina. Until this century or maybe a little before, everything below this green door did not exist until it was excavated.

After our tour and a nap later, Jen and I headed out for dinner. The food was great and the environment was very friendly and family oriented. Since I’ve been living in Florence for a while it’s funny to see American families try to speak Italian. There was a woman sitting behind us that tried to order in Italian but was actually speaking spanish. She honestly had no clue that she was doing it. I give her an A for effort though. Once we finished our dinner we were on a hunt for desserts. We asked around the hotel and they suggested Harry’s which was up the street. Harry’s was a very interesting place because it was decorated in film strips and photographs that had been blown up and put behind glass. It was kind of an old Hollywood theme, which I liked. I would say that day one of Roma was a success for sure.

Jen and I shared the chocolate pastry with cream filling and a nice chocolate drizzle as well as the apple tart with cinnamon ice cream.