Well, these past few days have been pretty interesting! On Thursday I made pappa al pomodoro and a bean soup recipe in my class. I also went to the Conad grocery store for the first time. One thing that is weird is that if you pick up produce you have to wear gloves. You also have to weigh it and put a label on it. When you check out all of the cashiers are sitting down. It’s a very weird process but the grocery store is SO cool.

Lattes and a view!

Today(Saturday), I went to Montepulciano and Pienza to a vineyard and a cheese tasting. We arrived at Montepulciano at around 9 a.m. It was a pretty overcast morning but as we were leaving the sun started to come out. Go figure. Jen and I stopped in for a quick latte at this cute little caffe and soaked up the view. I can say the views there were so beautiful. You just saw the Tuscan country side all around you everywhere you turned. I think I annoyed Jen from telling her how pretty everything was  every five minutes. 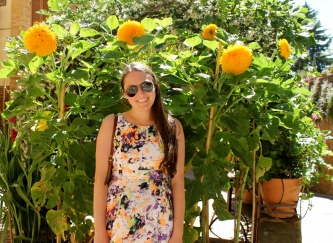 We left Montepulciano at 10:15 and arrived at Pienza at 11. Pienza is famous for two things: The second pope who influenced the Renaissance architecture and peccorino cheese. We sampled three types of aged cheese a three, six and nine month. The first was aged three months with tomatoes on top of them. In the olden days they had to figure out a way to keep stuff out of the cheese, so I guess they decided to use tomatoes. The second was for six months with ash on top of it. The last one was rolled in hay. All methods were used to keep bugs and stuff out of them. Also, for those of you who don’t know, Peccorino cheese is made from goat’s milk. 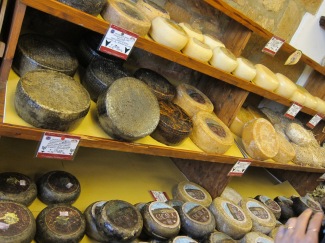 Once we left Pienza, we headed back towards Montepulciano but this time we went to a vineyard. What was cool about this vineyard was they used a type of skylight that was able to take the sunlight and use it for light throughout the entire cellar. Our guide told us that it cut down on over 50% of the energy they used. The vineyard that we toured produced over 5 different types of wine. Some of the wines were 100% Sangiovese grape as well as organic. After we toured the cellar it was time for the tasting. Jen and I got separated from one another and I was placed at the end of the table with two Asian girls and our bus driver who didn’t speak English. Needless to say the conversation was kept at a minimum with the exception of a few molto benes.

Hangin’ with some future friends. Only a few more years!

I think one of the coolest things about this vineyard was seeing the energy efficiency being used within the cellar. During our visit our guide was constantly explaining to us the ways that they have been able to conserve energy. Today was a pretty great day to say the least!

P.S. I decided to stay another term so everyone watch after ole Johnny while I’m gone!